FOR NUMEROUS PHILANTROPIC ORGANIZATIONS, THE CONTEXT CREATED BY THE PANDEMIC MEANT HAVING TO RETHINK THE WAY WE RAISE FUNDS. GUIDED BY CREATIVITY, IT ALSO MEANT NOTABLE DIGITAL TRANSFORMATIONS AND NEW OPPORTUNITIES THAT ALLOWED US TO PURSUE OUR MISSION TO ENSURE SUSTAINABLE ACCESS TO SAFE WATER, SANITATION AND HYGIENE, WORLDWIDE.

Over the past few years, the One Drop Foundation and world-renowned Phillips Auction House have built an inspiring partnership, beginning first in 2018 with the successful contemporary art auction, Art for One Drop, and followed in 2019 by an inclusion in the Phillips’ Annual New York Jewels Auction. In 2020, the One Drop Foundation joined forces with Phillips in Association with Bacs & Russo and the Prince Albert II of Monaco Foundation to present Time Counts, a watch auction initiative included in Phillips’ flagship New York RACING PULSE Watch Auction in December. A time-related experience and 11 collectible timepieces from incredible provenance were auctioned off to benefit both foundations’ missions. The auction was conducted live by auctioneer Aurel Bacs and broadcast around the globe, allowing collectors to place bids with telephone bidders in New York and London, as well as through Phillips’ online channels.

IN SUPPORT OF GLOBAL WATER ISSUES

In 2020, the One Drop Foundation also counted on the support of Phillips Auction House to sell individual art pieces, raising over US$140,000.

See it in action 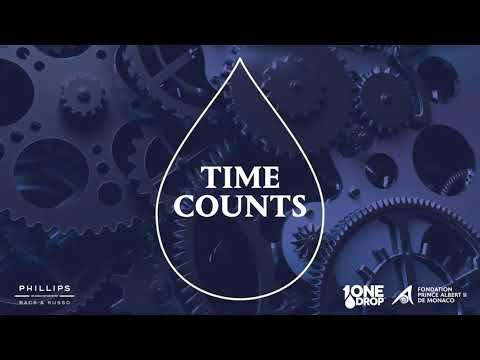